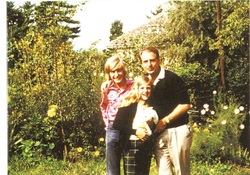 Your Stories
Since beginning this project, nearly everyone I have told my story to has shared a story of their own. Often these are stories about their parents, grandparents, or aunts or uncles that took place either at home or overseas during the Second World War. Surprisingly often, I am told by someone they intend to speak to a family member but haven't found either the time or the right way to go about doing so, or that they would love to access records, if only they knew how to go about doing so.
This is your opportunity to share stories and photographs from your personal history and a place to share tips and sources for conducting research.  If you have an story or advice you would like to share, send it here where it will be posted (under your name or anonymously). Family stories can be incomplete, but experience has taught me that the simple act of writing it out can help fill in timelines and even sort out facts. It also can lead to asking other family members for their recollection of certain events; surprisingly, this often fills in important details even though everyone might have heard or seen the event or story together.
The only requirement for sending information for posting is that it is factual - it is okay to include some speculation so long as it is identified as such. You can send your story and a photograph to author@aletterfromfrank.com.

For Xmas this year my wife bought the HBO DVD series called “The Pacific”. It is done by Tom Hanks and Steven Spielberg and is similar to their “Band of Brothers” series on the WWII about Europe. My Dad, Myron Grossnickle, was in the Pacific and we thought it would be a good education for our boys to see what their grandfather did in the war at their age. A lot of the images you present in A Letter from Frank mirror what my Dad went through.
My father was a very driven man, though with a gentle soul. There is a character in The Pacific who was that way. He goes in as this gentle person who  believes in God and as he experiences the atrocities and horrors of war you see  him harden and change. He reminds me of my Dad. I don’t think we can even  imagine the thoughts and images they had wrapped around their souls throughout  their whole lives. I can now only begin to understand the magnitude of their burden as I’ve gotten older and gained some perspective.
In 1941 at the age of 24 my father graduated from Iowas State University with a degree in chemistry. He undoubtedly could have worked in America in the war industry and been exempt from the draft. But instead joined the army. He became an officer in the artillery. He did not talk about his experiences much, but when he did they were quite disturbing. He mentioned that the only way he was able to maintain any semblance of sanity was to assume you weren’t going home and just accept the inevitable outcome. That exact same sentiment was expressed by the men in “the Pacific” after one very bloody battle sequence. I think it was a coping mechanism so they could go on.
My Dad won the  Silver Star, which is the second highest honor in the military after the  Medal of Honor (an honor usually only bestowed on someone
posthumously). He never talked about it and my grandfather had kept his medal and documents. The story as it was told to me was that the Japanese forces were about to attack the  allied position. My Dad led a scout patrol out to a point of land to act as a reconnaissance to direct artillery fire. The Japanese
attacked and were surrounding the scout position and were about to break through the front lines. My Dad had them use his position as ground zero for
the artillery barrage, which resulted in them repulsing the attack. A few men in the patrol died, but they saved the entire front. One wonders whether we
would have had the same level of  courage if we had been placed into their shoes.
When the war ended, he was asked by the army to stay in the service. However, he chose to leave, returning from the war to work at Armour Pharmaceuticals. He started as a chemist  and rose to be the VP of the R&D division for the company. He married Blanche Weiter and together they had five children, of whom I am the middle one.
Dad died in 2000. I have a photograph of him in his dress uniform on the wall we have reserved for family pictures. I've made my sons take a real good look at it because he was their age as he headed to war.

In April 2010, Cornwall Community Police Service Chief Dan Parkinson asked me to begin digging up some local police history with the goal of creating a coffee table book highlighting the 200-plus years of policing in Cornwall. The project took a sharp turn as I began researching the story of Special Constable John Robert Davey, a Cornwall leather and harness maker, who gave his life in the line of duty on September 6, 1892. You see, in August of
1892, Davey signed up to be one of the town's special constables. In a somewhat romantic twist of fate, Davey would die before the end of the first hour of his
first shift. He would become the first, and to this date, only Cornwall Police Officer to make the ultimate sacrifice.
Constable Davey's legacy had been lost through the generations and passage of time. I went on a journey to locate Davey's descendants, many now living in the U.S. I believed the story of John Robert Davey and his family was something people would want to know about. I had to find his picture and somehow find a way to bring his name back. As I searched for the picture I started to uncover family stories and incredible vignettes, little pieces of Cornwall and Davey family history and before long, I was cris crossing North America.
The end result was a memorial celebration held in Cornwall during the weekend of September 23, 2010 when 27 members of the families connected to this story, came to Cornwall and were in attendance, when a new tombstone for Constable Davey was unveiled and dedicated during a touching ceremony at St.
Columban's Cemetery. Later that day, the section of Ninth Street between Pitt and Sydney Streets, where the officer was murdered was officially dedicated as
John Robert Davey Memorial Way.
In my book about his journey, Constable Davey - A Future Lost, takes the reader through the horrific events of Sept.6, 1892, when Constable Davey's life
was tragically cut short. The book tells the story of Davey's family, his three sons and three of his brothers as they make their lives in Cornwall, New England, Buffalo, California and South Texas during the turn of the century (circa 1900). I followed leads as if solving a crime, my research took me down the many back alleys of genealogy. I was able to briefly delve into the lives of the other key players on that fateful day and located a grisly account of the killer's execution. I was amazed at the coincidences uncovered during this research and decided other people would be just as amazed. Ottawa Citizen columnist Dave Brown Called Constable Davey - A Future Lost "Solid Entertainment." For more information go to -  http://www.thomracine.com. 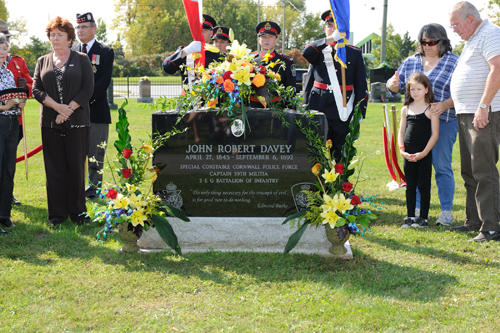